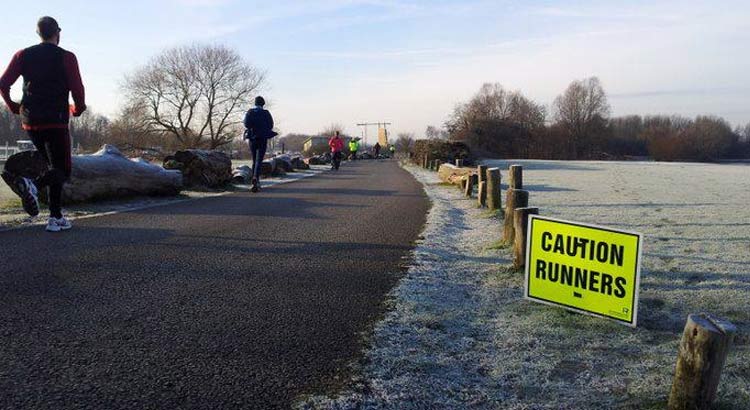 At 6.30am this morning it was minus 10 degrees’ – so cold my cat climbed into the refrigerator just to warm up. A thick blanket of frost outside, a blanket that was not as snug as a bug in in rug, but as cold as a mole in a frozen hole.

So onwards and downwards I followed all the snowmen who were migrating south across the blankets of snow to my best friends’ house where we swapped cars and drove down to Colwick Park via a Sat Nav that took us down dead end roads, round roundabouts several times, through canals, Sherwood Forest and lots of other things Nottingham is famous for, until we reached the Park – the boating lake. We thought we had made it – “your time of arrival is 8.50am perfect”. But oh no we were on the wrong side of the lake though we could see all the runners. So quick three point turn and back out, however we were locked in the boating lake area, they had locked us in, locked in I tell you and we didn’t have the key or a secret number. 5 minutes to start and we were stuck, were we about to swim across the frozen lake? A new take on Park Run, Lake Swim and it was still colder than a fart in a dead Eskimo.

Finally boat man let us out and we zoomed round to the car park dumped our stuff and ran to the start line to make it with 30 seconds start. We were both at the back of the field, and I can proudly say I was the last one to start. Oh yeah bring it on! I had forgot my gloves in the rush and only had a long sleeved t shirt on, everyone else had either appropriate gear on or tea cozies which were being used for things that tea cozies should never be used for.

So I had decided anyway to run with my best friend today. Why? Because I can and because I want to be able to appreciate my running. By running with my friend it brings something out of me, an appreciation of my love for running and a different experience to racing round.

My friend left me for dust as I started my phone app and jogged at the back of the field, she had gone, like a shot of lightening, wait for me wait for me! I was so cold my shadow froze to the ground, and when I took a step it snapped right off so I had to go back and collect it which delayed me even more. But soon I caught her up with a little sprint, my hands were iced up but this was not going to deter me from taking some photos, so I stopped and snapped and then raced on again to catch up my friend once again. And I did about 6 reps of this activity throughout the first 2 miles. A most enjoyable experience, stop, focus, click (and view my photos), run, jog, and again, and again and again. Try it sometime.

It was a really good experience being nearer to the back of the field, seeing people pass us, seeing us pass people who were gasping in the freezing cold air at their limits just as I am at my limits on my races. It was enjoyable watching the expressions on runners faces as they put all their efforts into the run, as the Marshall’s cheered on every type of runner, every man and his dog literally, every polar bear and penguin and every little girl and boy out there running with Daddy. Even if it was still cold enough to freeze the balls off a brass monkey.

The world was beautiful today, so beautiful that I snapped some images of the lovely lake. And click. The trail well, its a trail around a lake, and its beautiful. Maybe a little to flat for my liking but a really good route, a minor slope somewhere around the 1 mile mark makes for a little bit of effort and that’s about it. And stop and focus and click and run.

My friend beat me by 6 seconds to do a brilliant comfortable time of 29.30 and me 6 seconds later after a final stop, focus, click run (and pause to let the little boy and his bigger Daddy beat me to the finish line, I wasn’t going to push in I am British you know and I am polite).

Today I experienced something different today I just felt like doing this, to bring it all back to its routes, its frozen routes at that, it’s where I started; struggling to do my first 5km in 27 minutues, so enjoy your running, and never underestimate the power of stupid people moving quite fast in large groups in the freezing cold as everyone here today was a runner whether they finished first or one hundred and thirty first. Every man, his dog, every woman and their pengiun and every little girl and boy and their polar bear and every Park Run and their frozen parkers. Click – another 3 miles to add to 2012milesin2012

[headline h=”1″]Don’t ask me why I run. Ask yourself why you don’t. – Author Unknown