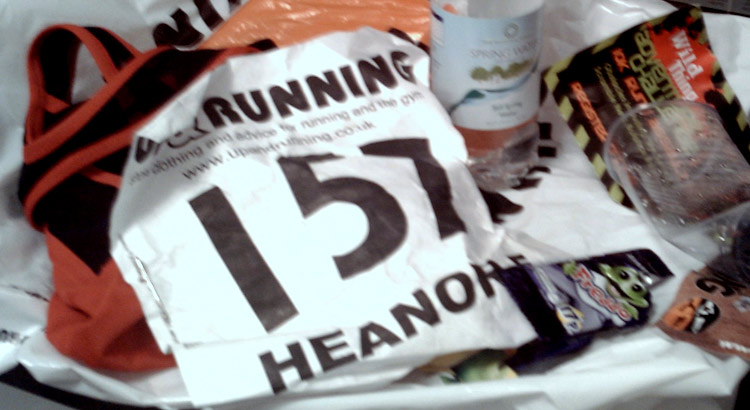 After making various excuses including injury, cat, work and just generally being lazy I decided to snap out of it and get my arse and legs down to Derby to run.

Heanor – a small village in Derbyshire hosted this 5 mile “road race” at a little cricket ground. End of July you would think the evening would be a beautiful glow of golden crisp sun. This is England folks – the evening was full of grey miserable clouds, even Prozac couldn’t cheer up the miserable English Summertime weather as they cried and cried and cried.

The start was all a bit unsurprising, as we were funneled down a country path. No one really knew where the start was. There were only 200 people most of which were club runners, were we about to come last? Was I the only person without a club running vest on? Probably.

My knee safely strapped in (its law now you know), the ibroprofen taken, I was ready to take it steady….go!

Trot trot trot, up, up, up, nasty hill, no steward shouting “nearly there” just yet. The race took us round country lanes, trails and paths whilst the clouds continued to cry cry cry. This was in miles not Km which was quite hard to get my head round as the first 1 mile sign came up it felt like it was 10 miles. Onto trail, mud mud glorious mud, 2nd mile mark – not even half way but apparently I was “third female” – “keep going lady” (and ignore those 6ft 1″ lads overtaking you).

The track was a figure of eight, something I had never done before. The rain just wouldn’t stop pouring down now, absolutely soaked but refreshed and happy as my legs ran through the streams and puddles overtaking some of those male competitors up the hills. This was my type of race.

I was conscious of my injury all the way, but if quit was part of my vocabulary then the word finish would not be.

I did wonder at one point what I was doing out there, all muddied up with rain streaming down my face, but I knew it was all down to that sense of achievement, time was irrelevant on this run, I was not clock watching I was just running.

Coming into the last mile I set up stride a bit more and kept up with the big boys, still “third woman” apparently. I think I may get a t-shirt printed saying “third woman” for my next race! I did glance behind me just in case “fourth woman” was behind me, no just rain and a cluster of guys. The last 500m three of us took in the cricket field and I overtook a couple of the guys whilst one strider whizzed past me on the last 200m sprint. I certainty don’t have the sprint regardless of whether it was grass or not.

Running is a mental sport…and we’re all insane!

And across the finish line I went at a time of 37.30. Phew!. Goodie bag collected, what a great idea in the goodie bag – a free towel and well needed on this drenching Friday evening.

So where was my friend Becky, well I only had to wait a few more minutes before I got out my camera and spotted her over taking her fellow runner in the last 200 metres to a brilliant sprint finish and a fantastic time.

Being third woman my prize a bottle of wine was a nice gesture though as Becky suggested I may have been more impressed with a box of tea. I had paid my little 50p after the race for a nice cup of tea to drink with my very healthy chocolate Freddie in the goodie bag. Becky deserved the wine more than me, it’s not about the winning it’s about the personal effort each individual puts in. Enjoy my friend enjoy, I am mighty proud of you.