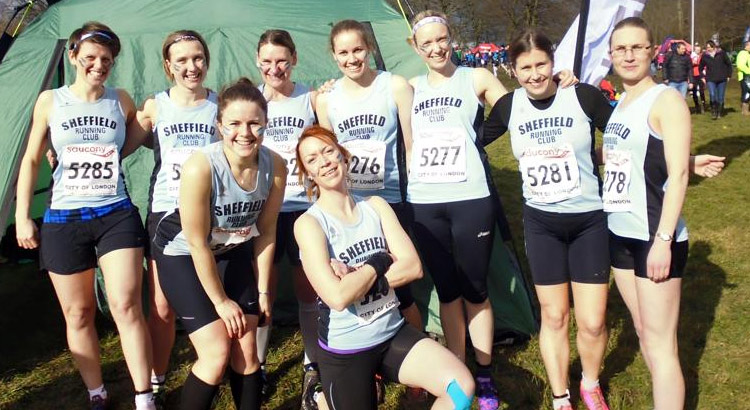 Saturday morning – 8.30am, ‘Mike’s Minibus’ takes a handful of Sheffield Running Club members alongside a couple of straggles from the other side of the Pennines who were relegated to the back of the minibus down to London to run around the ‘King of Cross Country Courses’ at Parliament Hill for the National Cross Countries.

It’s a long journey but worth every traffic cone, every expensive service station cup of tea and every little bit of chit chat and running banter that the mini bus can put up with. It’s just a great day out caked in mud and cookies. Of course I have to mention that quite a few of us were supporting our fantastic ‘croquted SRC hats’ made by our very own club member Laura courtesy of Happy Head Hats, to keep the mud off our heads.

I had ran the course some 3 years previous, in somewhat drier conditions. Having stalked my running Facebook friends on the way down I had come across a picture of the ‘mud’ that someone had posted and proceeded to share it around the bus. This was going to be simply Mud Run Fun.

We arrived to the iconic venue in plenty of time to queue for the wee’s. Already the ground was saturated in slime as our none race trainers became clammed up. We managed to find a dry spot for the tent and cake, knowing we would be caked in mud in a couple of hours time.

By the time the girls had queued for the wee’s, put their make up on (club face-paint), numbers pinned on, spikes shiny and chips tied securely, we had less than 10 minutes to warm up and pay another obligatory visit to the toilets. Toilet Watch: they were remarkably clean with toilet roll a plenty in each. That was a good start.

I was feeling indifferent about the race. Having had my first DNF a couple of months before on the last South Yorkshire Cross Country, I had been dragged through the mud a little, unable to make the Northern Cross Countries, so I was just happy to be here sharing this event with lovely fellow club members and being able to simply run. It really isn’t that complicated. Honest

865 women lined up in their respective pens like battery chickens ready to be released into the free range world. But today no one was chickening out of mud and there was no chance of being chicked either given that the women’s race was well separate from the men’s race and I reminded myself I was running less than 5 miles not 50 miles.

The three minute countdown began as some of the eager and more ‘leggy’ of the younger runners were keen on ensuring their toes touched the not so white start line. I never really get this concept, maybe because I am sometimes still very naive to the world of running. I prefer to hang back in an almost relaxed manner and go when the gun goes.

Although the ground was churned up thanks to all the junior races taken place throughout the morning, the air was still, with pockets of sunshine breathing through the grey winter clouds.

Run like the wind, unless there is no breeze then run faster than the wind

So the gun went, and so did 865 women, hurtling up the hill, driving towards the mud. We didn’t have to go very far before the first encounter of this delightful squidgy brown stuff. Oh such fun.

I never used to run in spikes but having bought some for £5 at a local cross country event last Autumn I did feel part of the game rather than an imposter and today they helped. They helped a lot. Now get the mud flying.

If the mud ain’t flying, you ain’t trying

Congestion at the top of the hill slowed down even the fasted of runners. I soon got my grip and went hurtling down the hill, unsteady in place and almost ramming myself off course where the tape markings had failed. I felt strong as I placed my feet with force into the ground, each spike clinging tightly through the ground to give me that steady grip to stay upright.

The course consisted of one smaller loop and one larger loop, around 2 miles and then 3 miles. The loops threw in a few gradients here and there but nothing to be frightened off, undulatingly muddy fun.

I ran-slid un-elegantly in-front of a few runners on a flat straight digging deep into the slimy sections, pulling out my feet on every step. It was so simple, just me the mud and my shoes in my happy place.

The first hill approached and whilst some of the girls slowed down, many half my age, I powered on up the hill taking advantage of my Sheffieldness of hillyness.

The rolling hills felt almost bouncy, up and down and round and round. This was a superb course, so much variety, so much mud. We were lucky if we got a bit of tufty grass in-between – a rest bite at its best.

The first lap was nearly over, I was in my happy place as I slid down the slope and across the course to conquer the second lap. The pack had spread out by now and it was much easier to feel the freedom of the run and the course and stability of the mud.

Mud is the new sweat

There were still plenty of runners to chase down as I took some more of them on, meandering through the mud, lurching round some of the girls who were now off the radar of a typcial Strava ‘Suffer Score’.

The bigger lap threw in a draggy hill. First we got directed into a somewhat drier wooded area, which I took advantage of and hit the ground running. I wasn’t about to believe the woman who shouted ‘it’s all downhill from the top of this hill’ as I knew there were a couple more cheeky little inclines to encounter before the rapid decent to the finish.

Minibus Mike was there in all his glory shouting us all on, although I couldn’t hear a word he was saying I was grateful for the encouragement, something about running well or keeping it up, or not far to go or something like that. Perhaps?

I heard the beep of my watch though it’s just pointless to look at it in cross country, utterly pointless. It was just there to remind me that I had about a mile to go and I could push on through even harder and gain a few more places. I wasn’t sure at this point where the other club girls were – whether any were in-front or just closely behind me. I had lost them all in the midst of the crowds of mud.

Cross Country is like life – however fast you are running, run faster

The final descent became a boisterous yet entertaining effort to hurtle down the hill in two feet of mud. One somewhat ‘leggy’ girl showed us all how it was down and lunged down in real elegant fashion, shooting past a few of us, knee’s as high as her ears, stride as wide as a mile. I did my best to do the same but did not have the technique, confidence or legs to copy that stunning downhill performance. I was left caked in a sunken Mississippi mud pie sponge cake.

I am not running away from something I am running towards something, specifically towards tins of homemade cookies

The home straight was indeed straight, straight into a straight of mud. What more would you expect. I was chasing a couple of girls on the straight, punching through every grain of mud and threw myself over the chipped mat covered in mud.

Run Cross Country, they said. It will be fun, they said

What a great course. There was a little bit of mud to challenge even the muddiest of mud-dwellers. In fact I did wonder if there would be less mud for the men as we all seemed to be buried in it.

I had finished just in time to see what looked like a mass herd of elephants stampede up the starting hill – the men’s race had begun. What a sight. Let the mud-fest infect the boys, I was off to eat cookies. No one ever drowned in mud you know.

The most important thing about a cross country event is not positioning but caking. Our efforts today were not quite the Great British Bake off but it could have been the Great Sheffield Running Club Cookie Off with a delightful array of different cookies including my rather odd ‘custard and white chocolate cookies’ courtesy of the BBC you know.

The boys did their muddy thing, we ate cookies and our chaperone Mike did more than a fine job of driving us all the way to London and back with the correct amount of tea and wee stops along the way. I am sure that was more hard work than running in a bit of mud.