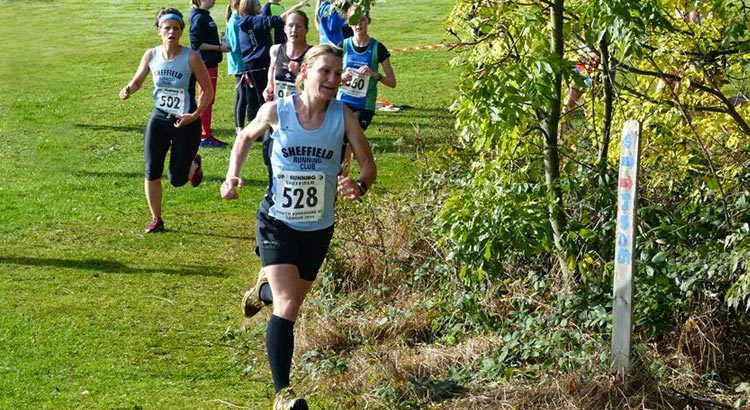 Of course. So take Spinkhill playing fields in the middle of October. The sun is shining brighly in the sky, not a cloud in sight. The army of blue vests are all dressed in shorts. Hardly a mud splat anywhere. Rumours had it that there was a mini puddle on the course in a ditch and that was all the mud we were going to get today.

We’re XC and we know it

After chatting for far too long with fellow club members the army of blue girls were the last to join the start line, but we made up for it with the runnning, none of us came last.

Every race has a story, this one had 1 large and 2 small. We were off as the first scramble up the hill resembled a playground fight. I ran up the hill getting caught in the initial congestion then finding my own ‘space’ and simply running.

Round and round I went, strenghtening up with every step. I was out of breath but feeling the love. The course was relatively flat with little mud. However I felt the weight of my mudclaws, men’s mudclaws like bricks on my feet. Too heavy too clunky. Was it time to invest in ‘spikes’?

Cross Country: We are training to run, not running to train.

The second lap – one small. Others were beginning to flounder as I passed them as gracefully as I could. The slight angle of the grassy bank made it difficult to pick up speed despite it being ‘downhill’. The juniors were shouting us on as we all went round for our third lap.

Fellow club member Clare was just in-front. I followed her as best I could, at one point catching her up and exchanging words to ‘get the TNT girl’, with that Clare flew on ahead to ‘get the the TNT girl’. I had nothing left in me. No excuses.

My aim was the Rotherham girl just infront and I caught her on the last brow of the hill. Onto the flat I ran but loosing steam as I floated down the hill. The home straight I chased Clare but the Rotherham girl came zooming past me. My biggest weakness I lack a sprint.  I had no energy left, I could not chase, I had to settle just behind her. Yet I would settle for that race. I had a good run. Boom boom cross country moon.