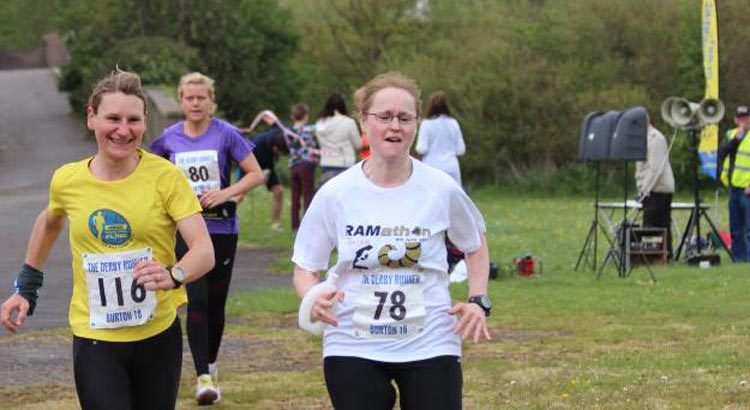 Burton on Trent was brewing a range of pbs for a 10 mile race involving a few 100 local runners and me. Starting off at a leisure centre, taking in park paths, housing estates and more park paths, double time. Run run run.

I wasn’t racing this because ultimately I am too lazy to race ‘fast’ and prefer to just run. Instead I was pacing my friend around the course, to a happy time.  A slight tweak to the leg also meant that I was out of racing.

We started near the back of the field, although it wasn’t really in a field but on a grassy bank next to the river. As a local race it wasn’t chipped so off we went. Boom and they all set off.

Only a few 100 metres on the grass and then onto the park pathways, this was delightful, a bit like a 3.3 parkrun, running along the green green grass, marshals strategically placed at the corners pointing us along the path, runners streaming ahead, racing ahead fighting for a personal PB.

1 mile in, 2 miles in and the route meandered carefully around the park, taking in a delightful bridge where a photographer snapped us up. Mile 3 was against the river and then up a ‘hill’. Gentle to start with but getting a little more powerful towards the top, with a drinks station perfectly placed at the brow of the hill and kind people collecting the cups. It wasn’t that bad it was just a slope.

Down a road we ran, dodging a few roadworks for good measure. The down hill bit let the legs rest after the ‘hill’. Becky was doing well looking strong, sounding strong, I was a little way in front chatting running, saying hi to the marshals thanking them as we passed people in all our glory.

4 miles in and the big main bridge was in sight, as was the finish but we had to do it all over again. As we passed the finsih line our names and numbers got called out and we went through with a big grin on our faces in around 48 minutes Brilliant!

Back round to the 5 miler and then 6 miles, going through 6.2 miles in under an hour which was fantastic, I knew by this point we were on for a good time, Becky’s target was around 1.40 and we were going to do it.

What we just ran we had to do it all over again.

Back up the hill again, although Becky was beginning to slow down due to the incline she was still going strong, following a woman in purple at all times overtaking people on the hills and feeling the strength.

Back in the park we were still overtaking people, a look at the watch told me Becky was going to get under 1.40 with ease and quite close to 1.35. I was hoping to push her a little more and a little more and just a little tiny bit more too.

Pushing over the bridge we had overtaken most people and chasing purple woman and another person just a few paces in front. The bridge was long but the finish was noisy and very much in sight.

‘Time for a sprint’ I turned round and said to an out of breath Becky, ‘you can catch them’ and indeed she did, as we made our way down the slope, Becky put in a great big sprint to sprint out the woman in purple and put me through my paces to bring home a Pb tastic time of 136.44