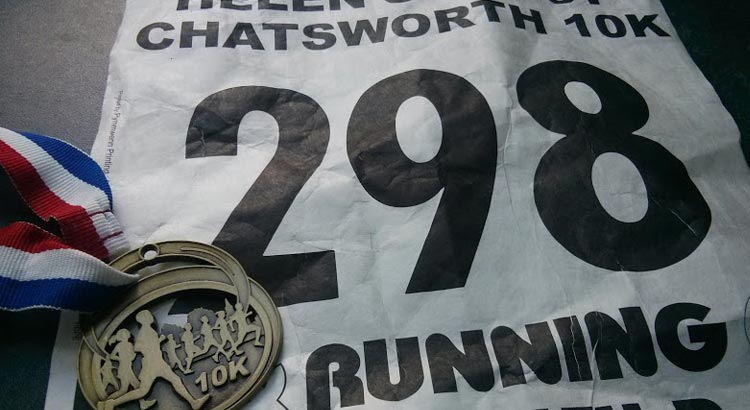 Chatsworth 10km is a scenic race around the home of the Duke and Duchess of Devonshire in the middle of the Peak District.

The hillsides are deliciously hilly, muddy and full of potential to run up and down, so why not run the Chatsworth 10km on a rainy bank holiday weekend? It seemed like a good idea this morning.

One of my friends asked the day before if I would run with her in memory of a friend who sadly passed away earlier this year. This was her home territory, she loved this area of the country so I was delighted to run with my friend, to appreicate being alive and well, and able to run and remember the strength and courage of others who are no longer with us.

It was wet. Lets face it, it was a bank holiday weekend so expect nothing better from the British Weather. I had to enter on the day so we arrived in plenty of time for me register. As we were early we were able to take advantage of the clean portaloos, early car park space and a nice cup of tea whilst watching the rain lashing down, lucky to be alive and well.

Time ticked on by and soon it was time to brace the windswept estate of Chatsworth. I had completed this race a few years previous, enjoying the ups and downs and rounds and rounds so I knew what was to come.

Lazy sundays maybe for some people

We placed ourselves at the back of the pack expecting around 1 hr 15 minutes. And we were off, the stream of runners overtaking the stunning estate.

The first mile or so we chatted and found ourselves overtaking lots of people, chat chat chat, lucky to be alive, enjoying the drizzle and the magnificent open space all around us.

The rain eased and soon we were both stripping off. The flat eased into an uphill slope and then onto more trail like land then onto a gradually steepened slope where people were walking.

We too walked up this bit, no point in running as the ground turned into muddy fell. Soon we were back on the straight and wide – the delightful pathway up, up and up.

Some were running some were walking up the wide pathway, we were running up, doing so well. Enjoying the views and the atmosphere of this delightful race. Saying hi and thank you to all the marshals sat there with their umbrellas sheltering from the showers.

Don’t underestimate the power of a hello

Even at 4km the pathway was still going up. This was hilly, not just hilly but hilly hilly. Finally at 5km a much needed water station sat, allowing us to gozzle down some cool fresh water before setting off again. The pathway gently eased off to flatten out and meander around the lake.

What goes up must go down, and certainty it did, as we found ourselves thrown down the hill, whizzing delicately down the stony paths. This was fun, so much fun, a good mile or so of open down hillness, speeding past those not so sure on the downness of it. For once I felt confident. I wasn’t racing so used this as an opportunity to enjoy the downhillness and work on my technique whilst still chatting and laughing about the beautiful world.

The downhill sadly came to an end as we were directed along an undulating concrete path. In front I could see another Sheffield Running Club vest. Although we were not supporting ours today my aim was to catch this vest up. We were close oh so close. We were also very close to getting a sub 60 although it would be tight.

My watch beeped at 5 miles – 50 minutes, so we would need under a 10 minute mile to sub 60. The Sheffield Running Club veest was getting closer as we put our silly running shoes on and flew down the banking flapping our arms and squealing like little kids, oh so lucky to be alive and be able to run this lovely race.

Back on the flat the home straight was very much straight and the club vest was getting closer and closer. ‘Got enough in you for a sprint?’ I asked ‘No’ came the reply and then suddenly bang I found myself chasing not one but two Sheffield Running Club Girls to the finish, bang bang bang – one, two, three as we finished the race in unison.

We approached the club vest and found out it was Hannah from the club, who was particularly pleased to have run just over an hour on the course. We of course were delighted with our sub 61 minutes, only 26 seconds off a sub 60 on this course was a brilliant tribute to an amazing woman.

And we are lucky to be here, treasure every minute of it.