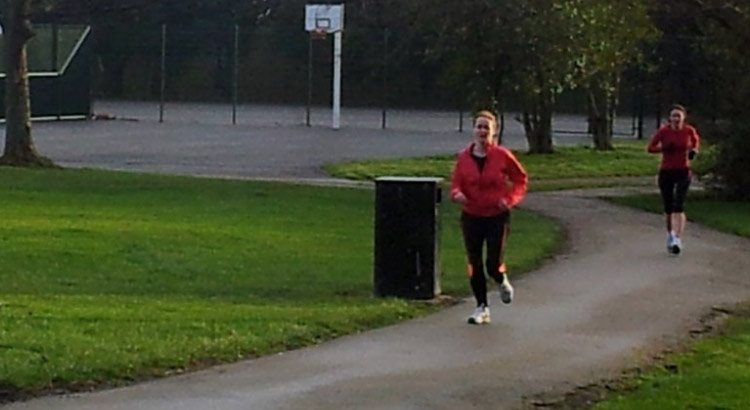 An eggstremely cold Easter weekend, still suffering from snow-DOM legs (a.k.a having climbed Snowdon in the snow some 2 days earlier) me, myself, my best friend and the Easter Bunny travelled by hare plane, to concord Park run for the second time this year just so the Easter bunny could stay fit by getting some EGG-xercise and HARE-robics.

I liked this Park Run previously, unlike the other Sheffield Park Run with a field of 300 this one at the other side of the city has a field of around 30 which means there is lots more room in the field to kick around and even have an egg and spoon race if you so wish. I also like the route, a 2 lap course with a downhill and an uphill – twice as nice.

On your marks getset go said Mr Volunteer from the South Yorkshire Fire and Rescue who do an eggstremely fantastic job, and we were off. Let happy runs multiply like rabbits. Happy Easter! Within seconds I had got a comfortable position around 8th or 9th and stomped on down the hill flowing with my legs. I had decided to opt again for no devices and just run, run my way, its my life.

The bottom straight was straight without wind this time, much more pleasant as I followed all the guys, aware I was the first female but remembering there were only 6 or 7 women anyway. For me this was just a means to have a bit of fun today, no pressure just a bit of free fun hopping around a Sheffield park just like the over sized purple bunny pooping colourful eggs all over the grass.

I caught one guy up on the hill and overtook him with some determination and ploughed on past the finish line and round the park again really feeling quite comfortable, my breathing feeling steady all the way, my mind clear, my head in my own little world. Fill my little world. I am simple, I like simple things. My mind began to wander away with me as I filled up my leg power back down the hill.

Running is a lot like meditation. You get a sense of seeing your life and putting some order to it – Christy Turlington Burn

I was now neck and neck, and foot and foot with another guy who had to stop to tie his shoelace up earlier, we were overtaking each other every 2 minutes, me then him then me then him, I scouted through the metal passway first then let him go on the next one and tried to keep up with him up the hill, at the brow of the hill, i wiped mine as he got away from me and strided on, I was unable to keep up, I didnt run with enough guts at the end, I could have pushed harder on retrospect but at the time I didn’t because I felt so happy and good and relaxed.

I came in at a time of 20.56; some 25 seconds faster than three months ago, and only the second time I have cracked the 21 minute barrier. My best friend came in just a mere 3 seconds behind the last run in the same park, a fantastic eggfort all around.

For me Park Runs are not so much about chasing PB’s that’s just a bonus, they are about the enjoyment of the run, of the community of sharing with friends, of watching others run at whatever pace. It does not matter it is just fun and a fantastic way to spend an Easter Saturday Morning. Eggtastic. Just think if we had all been rabbits and it had been in 25 degrees heat we’d have all been hot, cross bunnies.

I am a RUNner. It’s not just a hobby, IT’S not just what I do on MY free TIME, it’s who I am. No, I DON’T get paid for RUNning and don’t run TO WIN A RACE. Will never have a shoe endorsement, will never go to the Olympics. I run for the LOVE of it. I run for THE way it makes me FEEL. It’s my therapy, it’s my lifestyle, it’s me. I RUN because I am, I AM because I RUN – From Twitter