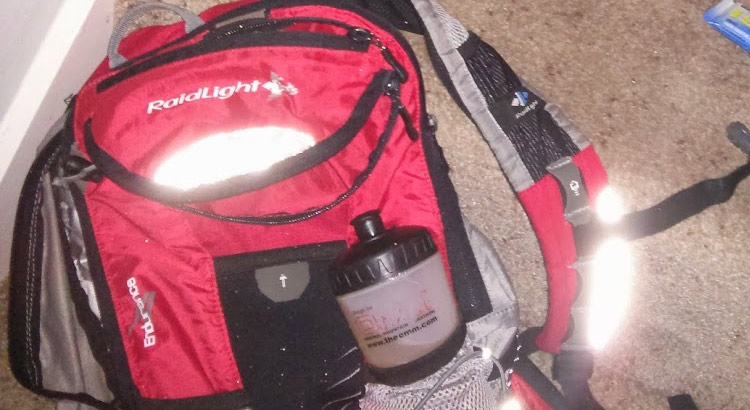 So around 7am I found myself singing along in the car on my way to Sherwood Forest to the Black Eyed Peas tonight’s gonna be a good night; apart from I changed the lyrics to

I had been described at work the previous day as ‘mad woman’ for doing my first Ultra Marathon the day before the Sheffield Half. Why? because I wanted to do an Ultra Marathon having never run a marathon before, and not really being ‘arsed’ to pound the pavements of some of the grotty parts of Sheffield.

I had opted for the 30 miler as my first Ultra, we were all mixed in together though. Some people without rucksacks – you mad people in this heat? I met one of my fellow twitter followers @dronfieldrunner where we talked about technical rucksacks and things. I ensured my shoe laces of my trail shoes were just like Robin Hoods – in a long bow – although I had made a mistake and wore my trail shoes when most people had road shoes on as I would find out the trails were rock hard.

And we were off, a slow pace to begin with on the trails as everyone found their own pace. I had established myself near the back but could have gone nearer the front as I overtook a lot of people to start with. Within a couple of miles 3 or 4 of us were comfortably running at a nice pace, some 8 1/2 minute mile pace or so.

First checkpoint was easy to find, grabbing a little banana and gulping down some water I didn’t stop for jaffa cakes, flapjack or anything else but ran on in the same group of around 4 around the forests. Some bits shady some bits hitting the morning sun.

How do you rate the morning sun
After a long and sleepless night
How many stars would you give to the moon?
Do you see those stars from where you are?
Shine on the lost and loneliest
The ones who can’t get over it

My map was in the back of my rucksack. One of the guys knew some of the route (brucie bonus!) and one of the pro ultra girls had a map in her hand so we were ok. Some of the route was road through pretty villages before decending into fields and back around the Sherwood, woodland. A couple of map consultations were unavoidable as the course wasn’t really that well marked. Doing well, doing well. I looked at my watch around 13 miles to find I had done roughly a 1.50 half marathon, woop! That wasn’t going to last surely?

If you start to feel good during an Ultra, don’t worry – you’ll get over it. – Gene Thibeault

At around 17 miles we were running back into the touristy bit of Sherwood Forest, with no cover at all, very exposed. How rude! Although we got clapping. The sun never gets tired of rising but sometimes a person gets tired of being under the sun and that was me at this point.

Yeah we all shine on,
like the moon,
and the stars,
and the sun
– John Lennon

I supported my sunglasses and cap which I was eternally grateful as it was hot and not undercover and I began to feel the heat as I slapped bladder water (this is not Wee for those of you wondering) all over me. Begining to feel a bit weak I took out my carb bar which was a bit too sweet but mouthed it down. I would have gone to the sweet shop where Robin’s Merrry Men go – the FRiar’s Tuck Shop but there wasn’t one so my little rucksack supplies had to do. I had a prep talk to myself to say I could do this as I followed the other guys in a zone. Unfortantly 2 of them went off course by a mile, and stupid me followed them, so that was an extra mile or so to add on. We got back on track and through meadowed fields and more trail we ran. We ran and we ran. We pushed we pushed and we pushed.

Unless you’re not pushing yourself, you’re not living to the fullest. You can’t be afraid to fail, but unless you fail, you haven’t pushed hard enough – Author Unknown

20 miles in and checkpoint 4 was the cut off for the 30 and 40 miler. I stopped here to get my bladder filled (I didn’t empty my normal bladder) took in some yummy flapjack and told the guys at the checkpoint what a great job they were doing. Then it was just me and Mr Robin Hood I am going to call him as he had a red t shirt on. Just the two of us going back on the 30 miler out of the surrounding group at the checkpoint.

Wishing our fellow 40 mile runners all the best we turned our backs on them and back we ran, not all the way back, as it wasn’t an out and back but just for 200 metres before turning down a bike track. The bike track seemed never ending, there was no ending and it was rising, rising high, I thought tides rose not bike tracks but this one did and it was painful. It was all exposed, the sun was beating down hard on us, and I was using all my bladder water on my head and legs, hot and feeling a bit dizzy I took in another gel. I was feeling weak, yet Mr Robin Hood man kept me going as we pushed on together and agreed those 3 or so miles of bike track were so tough. When the going gets tough people do not quit.

Finally shade, too much light, get a shade, a lamp shade, a tree shade anything will do, and on to CheckPoint 5. Flat coke was available I took a mouth full and spat it out, yuk, water for me all the way thanks.

Just about 6 miles left, only 6 miles left thats only about 55 minutes or so come on come on come on and oh bugger we went wrong again and ended up in a field full of baby beetroot then had to go back on ourselves to re-join the path, another half mile or so to add to our epic 30 miler – I told you Mr Robin Hood never listen to a woman! (or is that never disagree with a woman even if they do fart in your face).

If I knew what I was doing, I wouldn’t be here – Author Unknown

Despite our beetroot detour I still looked like I could do a watch time (that is running time, not event time) of around 4 hours 30 mins. Maybe? I had just run a marathon in a watch time of around 3.45 hours (event time probably a little more than this accounting for map reading and checkpoint stops) now how had I managed that? I have never run a marathon before.

Back on the trail, this was the bit that we had done at the beginning so we knew we were close, however so near yet so far as we took another wrong turning about 3 miles later and ended up on the road again another 1 mile out as we ran down a very busy lorry infested sun infested, wind infested, cap blowing off, me blowing off again infested road, where I clocked in my 30 miler in watch time of 4.28, event time of around 4.40. But the end was not in sight. Oh no.

Still another few miles to go then as we refound the the path and put one foot infront of the other in a kind of running type motion. At this point Mr Robin Hood was lagging behind so I ploughed on although I had run out of water by this point having splashed it all on my legs earlier, just had isotonic juice that tasted like melted jelly babies fermented in a hot car for 3 days. Yuk.

Only those who will risk going too far can possibly find out how far they can go. – T.S. Eliot

A welcome sight shone through my sunglasses as I recognised the cricket ground. Though there was no tape to mark the route. I was now feeling dizzy, my map had disintergrated into a pile of sweat (yes really) and my spare map was too deep in my rucksack to even care about it. So I relied on said girl who I waited for again, for she had reccied the route a few weeks before (ner!). The last bit was different to the first bit as we ran down through some housing estate and onto a main road. The lovely girl pointed me in the right direction at all times, so as she ran past me about 10 seconds before the finish I didn’t put in any effort to beat her that would have been mean even though surprisingly I could have sprinted that last 200 metres or so as I suddenly got a wave of ‘finish’ energy. But I remember someone saying never to race someone that close at an Ultra espeically if they prevent you from getting lost. So thank you girl who showed me the way.

Either lead, follow or get out of the way! – Author Unknown

So I came 3rd Female on the 30 miler and 7th overall. Ok could have been 6th and 2nd Female but when fair is fair and all that. No sweat!

Course time was around 5 hours 07 mins, watch time was around 4 hrs 53 – that is minus checkpoint stops, refills, map reading etc, to total a 32.5 run. I had in my head around 5 hours to do 30 miles and I have superseeded this especially in this heat. There was more dirt on me than in my garden, does this make me an ultra runner now? And finally I can forget about painting my toe nails now they are all a lovely shade of purple.