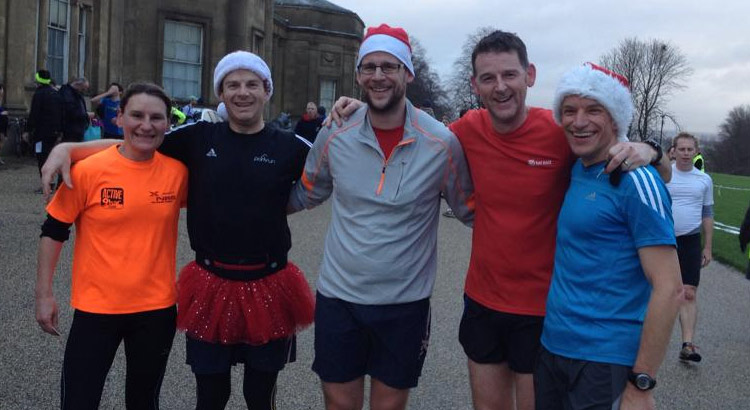 It’s winter solstice – the shortest day weekend, so this means its time for a run, a big run. Founded through Twitter, the ‘shortest day run’ a spin off from Simon from ‘Totley AC’, the ‘Longest Day Run’ was born. Thanks to ‘Twirly’, the crazy tutu man a.k.a Mike from Nottingham, the day was born.

Draw a map, find a path, take a breath and run

1. Meet at Dore Station at 7am

2. Buy a ticket from Dore to Manchester Piccadilly Transpennine Express

3. Jump around in the cold for a bit

4. Catch the 7.15am train to Piccadilly with all the holiday makers jet-setting off to somewhere sunny.

5. Get off train, meet Andrew who was coming from Wilmslow (still dark and Andrew will have been drinking coffee)

6. Run from Manchester Piccadilly to Heaton Park (still dark – just at 8.10am)

And off we ran to Heaton Park. Why Heaton Park you ask? Well RonHill was there in all his glory, 76 years old and celebrating a 50 year run streak, 50 years of running every day. Incredible. Mindbogglingly inspiring.

We arrived just in time at Heaton park, 8.50am which left us just enough time to strip off to our ‘race’ gear, line up, say hi to more runners, including Matt Ridge from Totley who had already insulted Parkrun founder Paul Sinton-Hewitt asking him if he knew the way, and listen to the inspiringness of RonHill who would also run the ParkRun.

There are so many beautiful reasons to be happy

My legs felt heavy running the 5 miles to Heaton, so although i would have liked to have finished off the year with a sub 20 minutes 5km it was not that ‘important’ to me (nor urgent) so I decided instead to have a bit of fun and just follow fellow friends Twirly and others around the park laughing and enjoying.

And we were off, first round a twisty path. To start with we were behind the incredible RonHill as cameras zoomed in on him, I soon escaped as Mike twirled for the camera and lapped up the surrounding giggles of his Christmas tutu, all red and shiny in all its glory. We were having fun and running a nice gentle pace, laughing and cheering and dancing along the park.

The route took us round a boat lake and up a little bit of a hill before lapping back on itself round the way we had just came. This was just mere fun although I was still struggling a little to get the cold air circulating through my body. So glad I didn’t decide to try and race it.

Mike and co were racing on ahead as I struggled to keep up with them, picking up pace around the 3km mark and powering on up the hill. I lost sight of them for a little while as I did my own thing, breathing heavily and wondering how I was going to get through the rest of the day.

Back round the 4km mark, fellow group friend Dave had finished the run in 18:08 and Alex in 18:36  and joined us for the final half km or so lap around the back way, as we pushed on ahead and began to over take some of the struggling runners. We meandered around the pathways and back up to the finish in a strong head wind for a sub 7 minute mile.

Either you run the day or the day runs you

A fantastic Parkrun, of course not my strongest coming in at 22.45, but with ample Christmas twirls from Mike, and another 23 miles ahead of us there was little point in trying to race it. RonHill came in at 29:20.

After milling around for a while, and some of the guys having their photo taken with the champ of all champs Mr RonHill, we set off for leg 3, back to Manchester Piccadilly, we had a 10.49am train to catch to Edale.

The streets of Manchester were already packed full of Christmas shoppers and selfie stick stalls as we dodged them all through the pretend German markets. 5 crazy runners with rucksacks on their backs charging through the city centre people must have thought we had lost our marbles, at least Mike hadn’t lost his tutu as he got endless claps racing through the streets.

Back at the station we delved into overpriced hot drinks and Christmas flapjacks courtesy of myself. I was not to carry all that another 18 miles or so.

Saying our goodbyes to group member Andrew, he made his way back to Wilmslow and we made our way to Edale on an old rickity train that resembled more of a bus to meet up with Simon and friend Tim.

We disembarked the bus like train, re-layered up ready to brace the wind chill of Lose Hill and Stanage Edge. Twirly was still supporting his Tutu as we made our way up Hollins Cross, Back Tor and Lose Hill, a gorgeous day despite the fierce wind. Happyness is running up Lose Hill

Blow, blow, thou winter wind Thou art not so unkind, As man’s ingratitude. – William Shakespeare

I was in my own happy little place. My DNF from the previous week was behind me, my anger and frustration almost disintegrated, to be running with great company in beautiful surrounding was my ideal of happy.

Tim knew the area very well and introduced us to a new route from Hope up towards Bradwell Moor, just before the moor we turned back into the picturesque posh village of Shatton. We ploughed through the outskirts of Bamford and up through the golfcourse onto ‘the clough’, part of the ‘Long Tour of Bradwell’ route.

Onto the roman road and I was in pure heaven, feet doing the work climbing up the newly surfaced pathway fuelled on Kendal Mint Cake and Christmas Flapjacks.

I may not be able to run a 5km under 20 minutes but I can run all day in the Peaks, I was so happy, running all the way to the top feeling alive and full of energy. Across Stanage we all went hoping over the peat puddles and gritstone rocks, chatting away admiring the beauty of the gorgeous Peak District.

We dropped down partway into Burbage, said goodbye to Tim who ran back to Hathersage, and then there were 5 of us again. A left turning half way down Burbage took us up what would be the final little climb which led us onto Houndkirk Road (A roman track not a road, we weren’t doing no road here.)

We all half expected King Goat – twitter ‘king of the hills’ Mr Houndkirk himself (goes by the first name of Trevor) to jump out and perform kit checks on us all. We had got all gear and headtorches but were making good timing and were going to reach Dore Station just before dark.

Down Limb Valley we ran the final stretch. I love Limb Valley, bouncy and fun as I strengthened my legs and powered on down to the bottom, now this was such fun even 17 or so miles into our fourth run and 28 miles into the day.

Following the valley down we meandered through Eccelsall woods and came up almost opposite Dore Station at over 18 miles.  Spot on Simon!

What a fantastic day of over 30 miles in 4 chunks with a bit of a mini speed session thrown in for good measure. Now that’s what I call a shortest day run ‘run’. Thank you guys for allowing me to be part of a magnificent day out and a lifetime chance to run the same Parkrun as the legendary RonHill.

Every mile is two in winter. – George Herbert