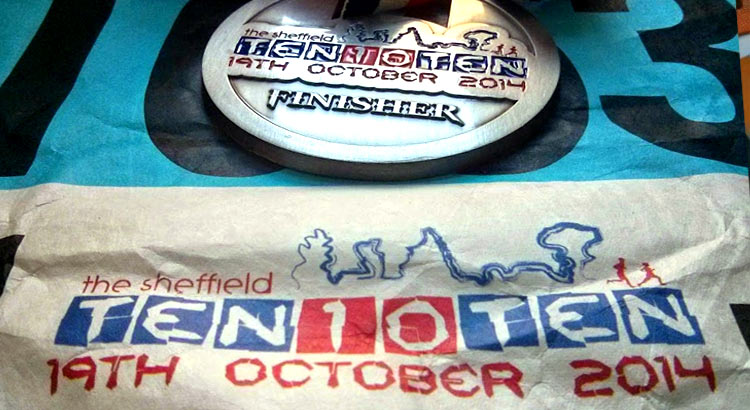 The race shows off my home city of Sheffield in its true form; zigging and zagging through beautiful autumnal wooded trails, through the lush green parks and a couple of Sheffield hills thrown in for good measure, after all we are the greenest city in the UK, right?

I arrived at Endcliffe park in plenty of time having ran down from my house – a mere 2.5 miles. Today I was pacing my friend Becky around the course as I had run the Round Rotherham 50 the previous day. I wasn’t so much sore but just tired and a slightly hamstring niggle was beavering away away under my bum. Anyhow I like running round with other people, there is something very very satisfying about helping someone else achieve their goal.

We positioned ourselves around the 60 minute marker. This was not a fast course, no PB’s were going to be set, you would be lucky to get within 5 minutes of your 10km PB on this course, but that isn’t what its about. It’s about something different to pounding the concrete, an introduction to trail, mud and hills and beautiful Sheffield surroundings.

At 10am people began to shuffle to the start line. The event was chipped, stuck on the bib number rather than the shoe. A good call given the amount of mud where people could have lots many a shoes and chips with gravy.

Becky shot off like a rabbit in headlights. I had problems keeping up with her, hold up hold up who is pacing who? I was slipping everywhere as the course meandered around the park fields. My own fault for choosing stupid shoes; my very worn out Altra’s, only because I wanted some cushioning. Becky supported proper trail shoes, wise choice. It was more like a cross country course than a trail race at this point.

The route sidetracked onto the road, a slight incline to the next section; Trippet and Whiteley Woods. Those that weren’t familiar with the route would not have known of the ‘mini mini Mam Tor’. A 100m scramble up a steep banking. Most people were walking up as well as sliding down the slope.

These hills were made for running

Back on the trails bottlenecks were forming at every muddy tree root. I was skating around the mud trying to keep up with Becky, sliding everywhere trying to squeeze through the gaps of other runners to keep up with Becky. The smooth mud and poor grippy Altra’s got the better of me and I face planted ungracefully into a muddy tree stump. Ouch! Asking if I was OK by kind surrounding runners I picked myself up and ran on, ambling up the slippy bank to catch Becky up. I can get through a 50 miler unscathed but put me on a 10km and I am screwed. Shoes really do matter.!

Back round Whiteley Woods trail we all ran and onto a nice wide footpath. This was slightly downhill, a somewhat faster section. We could see the front runners embracing their second lap already whilst we were just 4km in. Back in Endcliffe park we knocked out the next mile swiftly meandering around Endcliffe Woods. This was beautiful. The sun was shining and the autumnal crispy leaves were crunching elegantly under our feet. Running at its best. It doesn’t always have to be fast to be fulfilling.

Passing the 5km sign I realised I hadn’t started my watch ding – I pressed the start button. That must have been an indication that the front runners were about to over take us. Fellow club member Will was in the lead and skillfully passed us. He had run 2 laps in the same time we had run 1. I shouted my congratulations to him as many others did the same. Stunning effort. Great to see a local guy win the race and more so great to see a Sheffield RC guy win the race. For us we still had 5km to deal with.

The grass was well churned up now, on our second lap which was even more difficult to grip onto with rubbish shoes. I was almost grateful when the relentless road section appeared.

Back up mini Mam Tor we pushed. It wasn’t as congested this time. Back through the woods we ran. I wouldn’t face plant this time either. Becky was flying as I lost sight of her again as she sped down the hillside trail shoes gripping tightly through the mud, where I was left behind slip sliding away. It’s still all in the shoes.

Back on the concrete pathway I picked up pace hoping to spur Becky on a little more. The saying ‘it’s all downhill from here’ was defiantly true this time around.

It has taken me many years and many runs to realise that it’s not the clothing that makes the girl. It’s not the speed at which she runs. It’s not how little or how much body fat she has. it’s not the Garmin she wears or the running shoes she buys. What makes a girl runner ar the thoughts inside her. Does she think she is a runner? Well then she is. – Dorothy Beal

The last mile we were both overtaking other runners as we pushed on to the finish line. Spectators were cheering us all on, as were those runners who had well finished. We crossed the line together and handed a rather large bit of bling that could usefully be used as a bottle opener as well. A delightful route if I may say so myself.

The finish was rather congested, with queues for the ‘goodie bag’ – a plastic co-op bag handed to us to keep the queues moving, ample bottles of water, 9bars, a cappuccino milky thing and non alcoholic beer. The tee-shirts were only available to those that had paid their extra £8. We opted out of this extra cost; I am sure we have enough cotton tee’s to keep our house painting in business for many years to come.

The only thing missing to make it a truly authentic Sheffield event would have been a mini bottle of Henderson’s Relish – now there’s an idea – sponsorship from Henderson’s. My oh Pie oh Pie with Gravy which satisfied my hunger tastes at the end of Round Rotherham 50 the day before fuelling me up for the 101010.

This sum’s up a great weekend of running brought to you by advanced level mathematics & double running chemistry: