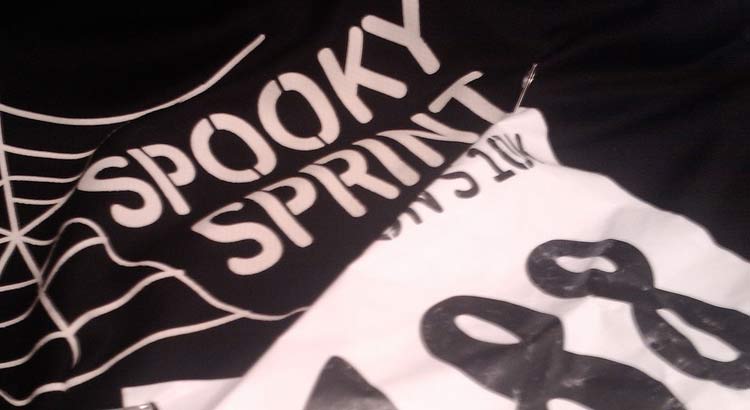 Something to raise my spirits: On the 30th October we joined 250 ghoules and ghosts and skeletons around the National Water Centre in Nottingham to run 10km. It looked spookily flat after training on the hills of Sheffield. 2 laps of the lake nothing to fear here. WHo is going to win? No body!

Everyone was supporting their spooky 10km glow in the dark t shirts and head torches. As the sun began to set the warm up began and the runners were channeled to the start line. Everyone was in good spirits; Ready steady Glow.. the race was off!

It was no deadly route, it looked flat, as a pancake – although it wasn’t Shove Tuesday. I started at a good pace keeping up with the front pack and felt strong for the first 2km.

We run, not because we think it is doing us good, but because we enjoy it and cannot help ourselves – Sir Roger Bannister

After the first corner of the lake I was on my way back down the lake all I could see was an amazing stream of lights, the head torches of the runners and ghosts behind me. there were plenty of stewards to ensure none of us got kidnapped by the ghoulish people.

Over the bridge at the 3km mark and round the canal to join the lake once again after another bridge plod. The voice of the commentary was just about hearable as the lap 1 times were called out with the names of the runners. I got good pace at 4km and continued through to the commentary hearing my number, name and the word “third lady” – woooohhhhhhh.

Believe in yourself, know yourself, deny yourself, and be humble
– John Treacy

A couple of skeletons passed me around my 5-6k mark, this is always my slowly downy part. But that was ok, I was on my own, on my own with the ghosts. Just running, until someone passed me around 7km, was it a ghost? He missed the 7km mark as he asked me if it was coming up soon, now that was spooky I’d just seen it 200m behind.

It’s very hard to understand in the beginning that the whole idea is not to beat the other runners. Eventually you learn that the competition is against the little voice inside you that wants to quit – George Sheeha

Wild ghosts escape from dreams, as I got into my zone and ran and ran and ran. The dark did make it a little more difficult as did the different terrain, including the dark woods and a bit of eye adjustment meant an unstable entrance from the woods.

I was gutted as a ghost passed me on the last 1km. Someone dressed up in some furry outfit. Gutted as I paced on towards the finish line. I was running on my own, no one to run to the finish line with me but I did my best I strode on past the claps and cheers. I was 3rd lady and clocked a respectable 46.19.

A great goodie bag, even though this event was not cheap, all runners received a good t shirt, a head torch, a copy of this months’ runners world magazine, a pin badge and pen, a milk shaky thing, and there were ample waters and bananas on site afterwards. One of the most respectable organisational smaller races I have attended. Well done guys.