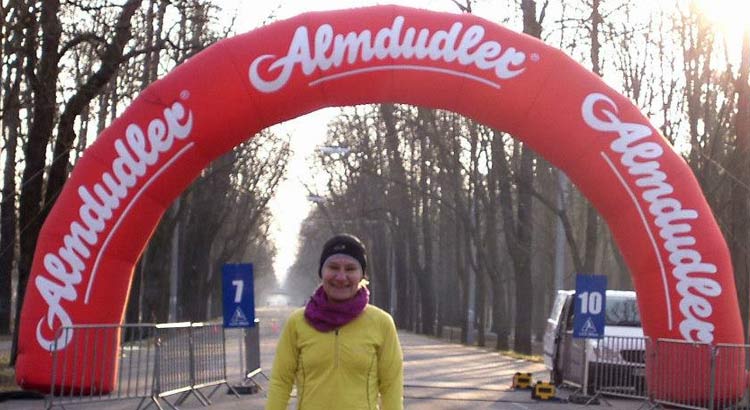 My first ever race on foreign ground took place in a Prater Park. A Prater Park I hear you say? Is that a park where Prats go? Well yes you must be a prat to run around a park surrounded by minus stupid temperatures and an abundance of Austrian Christmas Markets, too much Gluhwein big old Wiener Riesenrad aka ferris wheels and ice and snow. Only in Vienna.

It had been lightly snowing a few days before and so it was not a warm welcome to frost and ice on the ground on this freezingly cold frosty Sunday morning. We were staying almost opposite the large Prater Park where the race took place. It was a completly flat course which posed a rather big challenge for a girl who is in love with hills. I knew though that the hills would wait for me back at home.

Make voyages. Attempt them. There’s nothing else. – Tennessee Williams

The first challenge a couple of days before the race was to collect the chip and number. Normally quite straight forward in the UK. In Europe you have to either rent a chip for 3 Euros plus 30 Euros deposit or bring your own. So I rented the chip and ensured it was tightly chained to my shoe laces, I was not going to loose 33 Euros. Oh no.

The race was a low key affair run by the local running club LCC-Wien, around 300 runners or so were registered but I am sure less turned out on this minus 5 degree chilly day. Aptly named LCC Adventslauf yes it was a laugh indeed, running 10km round a park in mid winter and the coldest temperatures I have ever raced. Did I mention it was cold? It was so cold I could use my breath to build an igloo.

At the start Santa Baby in German blared out amongst other Christmasy songs in German, supposedly to get us all in the mood but we were all too cold to care.

The park not only supported these mad freezing runners but also those cross training for skiing, Nordic walking, dog walking and standing cheering on a few hundred runners around a park. Of course there were your normal morning joggers who I bet had wished they had joined in if only for the banana, wafer biscuit and hot juice afterwards. I am sure most people would have rather have been traveling around the Ubahn – Viennas answer to The Tube.

The Austrians didn’t really go for club vests although there must have been a decent amount of club runners there. That didn’t stop me supporting mine in true Sheffield Running Club style over my long sleeved top, gloves and hats yes I said hats – plural. Not a pair of bare legs in sight this morning as we milled around the start line. There was no crowd pushing to the start line either, people just hung back as the horn blew and we were off my shadow nearly freezing to the start line before I had begun.

Winter is nature’s way of saying, Up yours. – Robert Byrne

Immediately there was space, immediately I felt though I was suffering as 6ft towering Austrian men overtook little 5ft 3″ me. Immediately I ran ran ran as fast as you can can can can, you can’t catch me I am the Lebkuchen.

The route took us a loop around the picturesque park and nearly back to the finish so we passed through the 8k and 9k signs first amongst the 1km and 2km signs. I was almost running on my own did I smell or stick out so much because I was the only foreigner there? Smelly English People.

I began to really struggle at the 2km mark. The freezing cold weather, the body’s inability to run 10km at a speed slower than my half marathon pace, a lack of exercise for the past month, too much Apfelstrudel, stollen, Schinkenspeck, Gluhwein etc, the excuses are endless. A wave at my friend just before the 3km sign gave me an extra impetus to run, the voice in my head that said I couldn’t do this, I told the voice that they were a big fat liar.

The 4k marker was approaching but not fast enough. The fast runners were now heading on their way back through the big loop. An Austrian guy overtook me and spoke to me, in my fluent English I replied back “sorry I am English I don’t speak a word of German” so in his fluent English he replied “that headwind is strong isn’t it” – how do they speak such good English? And off he went leaving me to breathlessly struggle through the next 5 or 6km and chase my freezing breath.

I had no idea what time I had done the first 5km in but I could feel my body become heavy, my legs like lead, my lungs frozen unable to get the air in properly and feed the rest of my body. However I was gradually thawing out as the gloves first came off and hat promptly followed allowing me to flow fully run a bit stronger. After the 5km mark I could see the finish which we had to go through to finish but also to do another 3km, gulp not used to this at all, give me my hills back.

Consider the postage stamp, my son. It secures success through its ability to stick to one thing till it gets there – Josh Billings

Just before the 7km / finish mark there was my friend again shouting “Go Helen, first female” – Gulp again keep it up, keep it up. Through the finish I went and heard my number being called “ACT, FEAR, ACT” I had learned – 848 – or something like that and my surname “Pickford” – so on I went but really gasping for air and feeling these last 3km were like 3 back to back marathons. Back round the loop should have been familiar but the tape had been moved slightly to make it a proper 10km.

At 9km I felt like I was moving backwards faster than a frozen Ferrari although I knew there wasn’t another woman in sight so my aim was to maintain this position. Having a little prep talk to myself I ran on, down the side of the park and up to the finish. I saw the clock at around 42.20 gritted my teeth and ran for a very painful 42.40 finish.

Immediately an Austrian woman came up to me and garbled some German to me, I shrugged as she told me in rather good English I was first female and to come to the ceremony at 12.30pm.

A table with hot or cold juice (Gluhwein for runners), Mammer schnitten mit haselnusscreme, and chopped bananas awaited. I knew the lovely Sheffield Running Club were basking in a cake competition today so felt a bit cheated with the unarray of baking goodies, but even the wafers did go down quite well. Actually.

Once you have decided that winning isn’t everything, you become a winner. – George Sheehan

So arguably not a fast time for me, by far, some 1 minute off my official PB and way off the pace I was running half marathons in a couple of months ago, but I was walking away happy with the time albeit not the effort and feeling I had on the run. I was happy to just finish, to finish in under 45 minutes even better and to win a trophy even more better. So onto the ‘ceremony’ in the LCC-Zentrum; their club room.

After all that I was apparently handed over the second female trophy; not first because a mysterious “Andrea” beat me with a time of around 39 minutes. This Andrea was Italian and seems that they are marked as Male30 on the official results.

In the women was Helen Pickford , from the Sheffield Running Club take the trophy home with them. The English lady pointed Sabine Winkler 45:21 and Lisa fighter-Bax 46:58 on the courts.

I am more than happy with my second trophy that’s more than fine with me thank you very much. I was way out of my comfort zone, language wise, terrain wise, lack of hilly hills wise and Bursa injury wise so anything beyond finishing was a Brucey Bonus for me. That’s if they have Brucey Bonuses here?