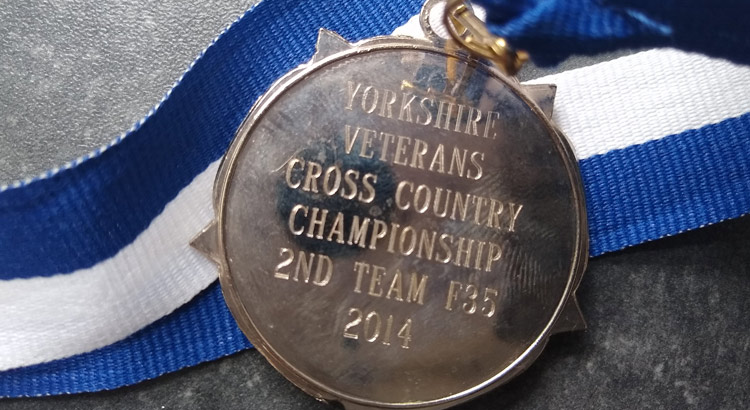 The Yorkshire Vet’s Cross Country event was taking place just outside of Leeds at Nunroyd Park. It took longer than my marathon time to drive up to Leeds due to the Bupa Great Yorkshire Run taking place the same day in Sheffield blocking all the surrounding roads. With just 15 minutes to spare myself and fellow club member Deb’s (and daughter Nuria) arrived just in time to do a 2.6 minute warm up before we were off.

Cross Country: Finally a real use for Nunroyd Park – made-up

This was a two lap course for us the ladies, and a four lap course for the 50+ men who would start with the girls (girls – this is a Vet’s race). And before we could count down from 2.6 seconds we were off.

Everyone shot off across the park. I soon found my own space on the outsiderness of the pack. Debs and Debbie had shot in front at this point however I caught Debs up just under a mile in around a narrow path. This was a flat-ish course for cross country and dry as well. Only one bit of bog to content with – would my little trail shoes make it whilst the majority of others had spikes? I ploughed through the mud at indelicate speed but a couple of girls did over take me. However I got them back up the little hill and around the tree on lap one.

I thought about stopping then I ran harder – Pinterest Quote

Second lap in and I was breathing heavily but feeling relatively ok. Legs were a little tired from a run the previous day but nothing that I wasn’t able to sustain. I found myself overtaking some of the guys, almost wishing I was doing 4 laps instead of 2. It was just a little too short for my liking.

Back round the ‘mud pit’ I went keeping to the same side as before, slipping a bit but pounding through. By this time no other women were near me so I only had the men to chase down. In a way a shame as it felt I was running on my own towards the finish.

When you don’t know what to do, just breathe. – Pinterest Quote

Because myself and Deb’s were late we ended up pinning the wrong numbers on our club vests. Not that it matters, I can’t even remember the exact time that we both got, I just know it was under 17 hours and just over 17 minutes. That will do for a day of running.

We found out later that we had bagged a silver medal for the 35-45 team. Not bad going for 2.6 miles each.