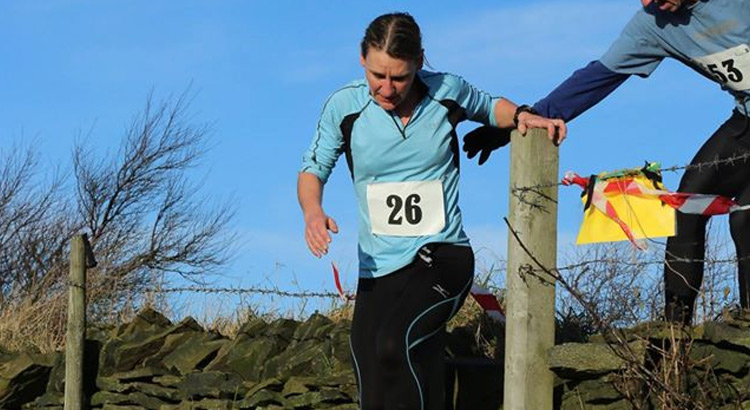 It is a lovely low key event with around 80 runners, most ‘runners’ had opted for the globally famous ‘Percy Pud’ the following day because of its Christmas Pudding and ‘fast’ tarmac coated course. But not me this year, I along with Paul Blackeny and Deb Richards from Sheffield RC headed off on this frosty morning to the little village of Oxsprings, to put a spring in our steps this wintry morning.  At only £5 per head, I would have some of that.

The start was uphill and we were told it was ‘hilly’ and for anyone who ‘ran the lot’ there would be a special prize. Now I know I like my hills but what had I got myself in for?

At the start line I was amused that they had a clock timer, a little race like this with a clock, mighty impressed already. Before I could say ‘chilblains’ I was off, dressed in long trousers, gloves and long sleeved top.

Up and up and up and up the start went, first on a track and then hitting the fields. Within a few minutes I was warming up and striding out up the hills, doing my best to overtake people. I caught Paul up who I found out later ‘started off slow’, I must have started off like a snail going backwards then, in true me style.

It must have been a good 1.5 miles up the fields, squishing through the farmers fields and jumping over the stiles. I am mastering getting over the stiles in much more style than I used to, not to be as frightened of falling, and concentrating much more effortlessly.

So that was the slightly hilly start and looming infront of 80 or so runners was another hill, where people were walking, yes folks I say ‘walking’. I joined them for 10 seconds or so, really no point in running up this one. It was what I would call a little ‘straight up’.

At the top I fought with the ground and whizzed down the hill, relieved to have got to the top. The crisp blue sky making this a perfect Saturday morning.  So well marked with yellow tape, arrows and marshals at almost every possible point, this was a faultless route, you could tell it was run by runners.

I felt myself effortlessly floating down the hills, feeling much stronger than I used to downhill, using my arms for balance. Although a couple of guys were much faster than me I did catch them up on the flats.

Through some lovely deep dark woods, these trails were perfect, slightly muddy, leafy and fun! I chased the two guys in-front of me as much as possible. What goes down must go back up, as I worked my way back up into Green Moor to catch up another guy who told me I had ‘got him’, darned be rude count my chickens and tell him he had been ‘chicked’, not yet anyway as my breathing was deep and loud.

I was concentrating so much on the guy just two steps in front of me that when he went slightly wrong, I followed him, we soon corrected our ways and got back on track then a little road. The arduous climb up towards Green Moor village on tarmac took it out on my little legs but I kept chasing the 6ft guy in-front of me. I am in my own little world as I just simply run.

Running: the human body’s most raw form of freedom

Back on trail I was in heaven again dancing down the muddy tracks. The guy in-front took a tumble, in true friendliness I asked him if he was OK, no broken bones.

With just over a mile to go, friendly marshals told us to be ‘careful of the stepping stones’ – Stepping stones? huh? no one told me of any stepping stones. The guy in-front took the sensible option and ran straight through the river crossing. I took the dry approach and stepped delicately over the stones, but gave in half way across and dived into the freezing water as the guy in-front had made a sensible escape from me. My feet were already wet from the mud and puddles through the woods so really it made no difference.

My love for hills came into force as I caught up the 6ft guy and he politely let me pass commenting that there must not be any more hills as we have ‘surely climbed them all in Yorkshire’.

I was running on my own now, in the far distance i could see two others fighting it between them. It was just me, my mind and my legs carrying me the last half mile or so towards the finish.

Back down the track that we had run up an hour or so ago made a great finish. As I ran through the tunnel I could see the clock and the finshed runners gathering towards the bottom of the field. I was chasing no one but myself, down the track to a time of 1 hour 1 minute and something like 12 seconds and grabbed a 1st female position.

Paul came in a few minutes later, grumbling as ‘old men’ do (read Paul’s review on the Club Website) and Debs only a minute behind to take 2nd female position.

What a delightful little 7.3 miler. Next year they are ‘running’ the event in both summer and winter. one of these will be the reverse way around. I look forward to the challenge already. I loved that hour or so of my life.

Photo courtesy and with permission of Mark Havenhand